A selection of Moody’s latest comparative insights on global emerging market research. For a complete list of EM reports on Moodys.com click here.

Is recovery or relapse in store for global emerging markets?

As carbon transition accelerates in emerging markets, sectors with limited decarbonization options will face the most risk

Net-zero carbon commitments are no longer limited to advanced economies: most of the largest EM countries including China, India, Brazil, Indonesia and Saudi Arabia have announced a target. However, efforts to meet these commitments will increase carbon transition risk for the most exposed issuers in these regions, especially those in hard-to-abate sectors. While emerging markets will reap myriad health benefits from the transition to a low-carbon economy, including curbs in pollution-related mortality rates and health issues, adjusting to a low-carbon economy will require balancing economic considerations against decarbonization efforts.

Our analysis shows that most of the investable universe in EMs is from carbon-intensive sectors: around half of the Eurobonds issued last year by emerging market issuers were from carbon-intensive sectors such as oil and gas and utilities. Consequently, a sharp increase in investments is needed to finance a transition to a low-carbon economy: more than $1 trillion in annual clean and energy efficiency investments will be needed in emerging market economies under the IEA’s Net Zero Emissions by 2050 scenario. Moreover, raising this level of capital investment from concessional and market based financing sources will be challenging, and the commitments made to date from multilateral development banks fall well short of most emerging markets’ climate-investment requirements.

The level of differentiation between companies in emerging markets and advanced economies is contingent on a sector’s inherent exposure, business model and policy mix. Emerging market companies in hard-to-abate sectors like oil and gas, steel and airlines are more exposed to transition risks than those in sectors with scalable technologies, such as electric utilities and auto manufacturers.

In some of these sectors, emerging markets have some advantages over their advanced economy counterparts. For example, in the oil and gas sector, emerging market oil refiners are better positioned for carbon transition because middle distillates and petrochemicals are less exposed to carbon transition risk than light distillates like gasoline. However, in other sectors like steel production, less energy efficient furnaces place the Chinese and Indian steelmakers in a more vulnerable position to carbon transition than their peers with a greater share of efficient electric arc furnaces (EAF) in the United States. That said, in the short-term, the surge in scrap metal prices arising from the Russia-Ukraine crisis puts steelmakers with higher EAF capacity at disadvantage.

Just as the global economy was finding its footing, the Russia-Ukraine military conflict is now threatening to exacerbate the negative effects of the pandemic for many emerging market sovereigns. While the credit impact of the pandemic for emerging market sovereigns was uniformly negative, this latest shock will result in a range of outcomes that will hinder, albeit not derail, the recovery trajectory. 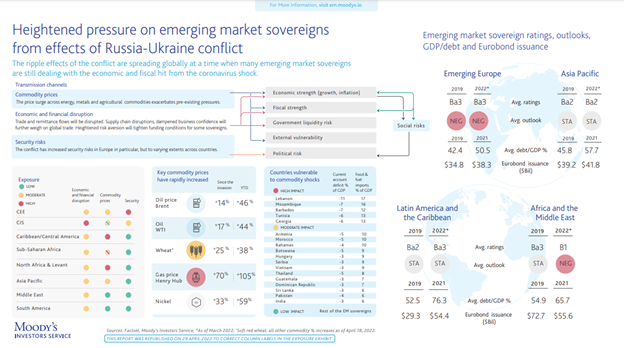 Direct spillover effects across the emerging market universe will vary, although risks to sovereigns from the invasion are not as broad-based as those from the pandemic shock. Sovereigns with the strongest economic and financial links to Russia and Ukraine (Caa2 review for downgrade) are most at risk of credit quality erosion, particularly among sovereigns in the Commonwealth of Independent States (CIS) and Central and Eastern Europe (CEE).

The broadest transmission channel will be through higher energy and food prices arising from the invasion. Global food prices are at record highs in nominal terms and at their highest level since 1974 in real terms. Even before the outbreak of the military conflict, unfavourable weather and higher input costs for fertilisers and energy suggested prices would remain high this year. The disruption of food supplies from Russia and Ukraine – which accounted for a combined 26% of global wheat and meslin exports in 2020 – will further compound inflationary pressures, hitting sovereigns in CEE, CIS and Sub-Saharan Africa hardest.

Assuming the global economic impact of the conflict is contained, normalization of activity and supply chains, and monetary policy tightening that curbs demand-side pressures will support a gradual easing in inflation back toward pre-pandemic rates in the second half of 2023. However, there are material risks that inflation will persist for even longer. In a scenario of persistent inflation, monetary policy credibility could be eroded, leading to higher inflation expectations and causing inflation to become entrenched, and leading central banks to raise interest rates more aggressively, or face challenges maintaining policy accommodation as economies weaken, which would reduce debt affordability. In such a scenario, emerging markets would be more exposed to rapidly rising funding costs due to weaker debt affordability relative to advanced economies.

The terms-of-trade shock created by the conflict will be greatest for food and fuel importers. Countries that rely most heavily on imported food and fuel are likely to experience the most negative terms-of-trade shock because demand for food and fuel imports will remain high even as the value of the goods and services they export declines. Net food and fuel importers will be among the worst affected. These include small island economies already struggling with the loss of tourism from COVID-19 such as the Maldives (Caa1 stable) and Jamaica (B2 stable). By contrast, commodity exporters – and major oil and gas producers in particular – will benefit from more favourable terms of trade.

On the other hand, disruption through financial channels will be manageable for all but the least creditworthy sovereigns. Emerging market sovereigns have issued more local currency debt, become less reliant on overseas investors and some have launched quantitative easing programmes, which have helped provide liquidity and market stability. Nonetheless, the outlook is less benign for frontier market sovereigns, which have seen a sharper widening of their sovereign credit spreads compared to emerging markets. Stress tests on financial conditions show that a sustained spike in borrowing costs would cause the most severe deterioration in debt affordability in Egypt (B2 stable), Pakistan (B3 stable), Ghana (Caa1 stable) and Jordan (B1 stable), while Sri Lanka’s (Ca stable) debt affordability, already the weakest by far, would weaken further.

Rising food and fuel prices, and supply chain disruptions – exacerbated by the Russia-Ukraine military conflict – mean that inflationary pressures will be more pronounced and persist for longer than we previously expected.

The invasion of Ukraine has led to a steady deterioration in the ability and willingness of all three governments to repay debt, and will have long-term economic and fiscal consequences.

Contagion through financial market, including emerging market exchange rates and sovereign spreads, and macroeconomic channels to the rest of the EM universe has been relatively contained so far. EM exchange rates have been particularly resilient, with the Brazilian real, Mexican peso and South African rand strengthening against the dollar over March, supported by hawkish domestic monetary policy stances.

However, additional inflationary pressures from the Ukraine crisis will drive tighter monetary policy across major emerging market central banks. The surge in global oil, metals and food prices following Russia’s inflation of Ukraine will create a further inflationary shock which emerging markets will be more exposed to than advanced economies. While growth in headline inflation slowed or paused for many major EMs in February, consumer prices will rise again over the coming months in many emerging markets. Our baseline scenario assumes oil prices will average over $120/bbl in Q2.

The decision-making process of emerging market central banks will be complicated by the fact that the economic recovery remains fragile in some of these countries. Projected real GDP growth for 2022 is barely in line with, or in some cases below, the long-term average in Mexico and Brazil. The recent rise in oil prices, if sustained, will also be negative for growth and inflation, particularly in net oil-importing sovereigns like India, Turkey and South Africa.

Moreover, not all emerging markets have proved immune, and particularly those with weaker credit ratings have seen market access become more challenging. For example, as of 7 March, Egypt's risk premium in global capital markets peaked at 1,040 basis points (bp) from 705 bp at the start of February, reflecting the country's exposure to global capital markets disruptions following Russia’s invasion of Ukraine. Risk premiums at these levels indicates interrupted access to external markets at affordable terms. If interrupted market access persists, liquidity risks will increase for Egypt.