We are kicking off the #MoodysOutlook season with our State of Nations – the annual event that brings to life our highly anticipated macroeconomic and sovereign outlooks for the year to come and how markets are grappling with global and regional conditions.
This year, we look forward to welcoming you to a series of virtual events covering EMEA, AMERICAS and APAC. The State of Nations events will be followed by the Sovereign Deep Dives providing you with a close up view into key markets across the globe.

State of Nations events are now available on-demand. Sign up to any of the editions below. 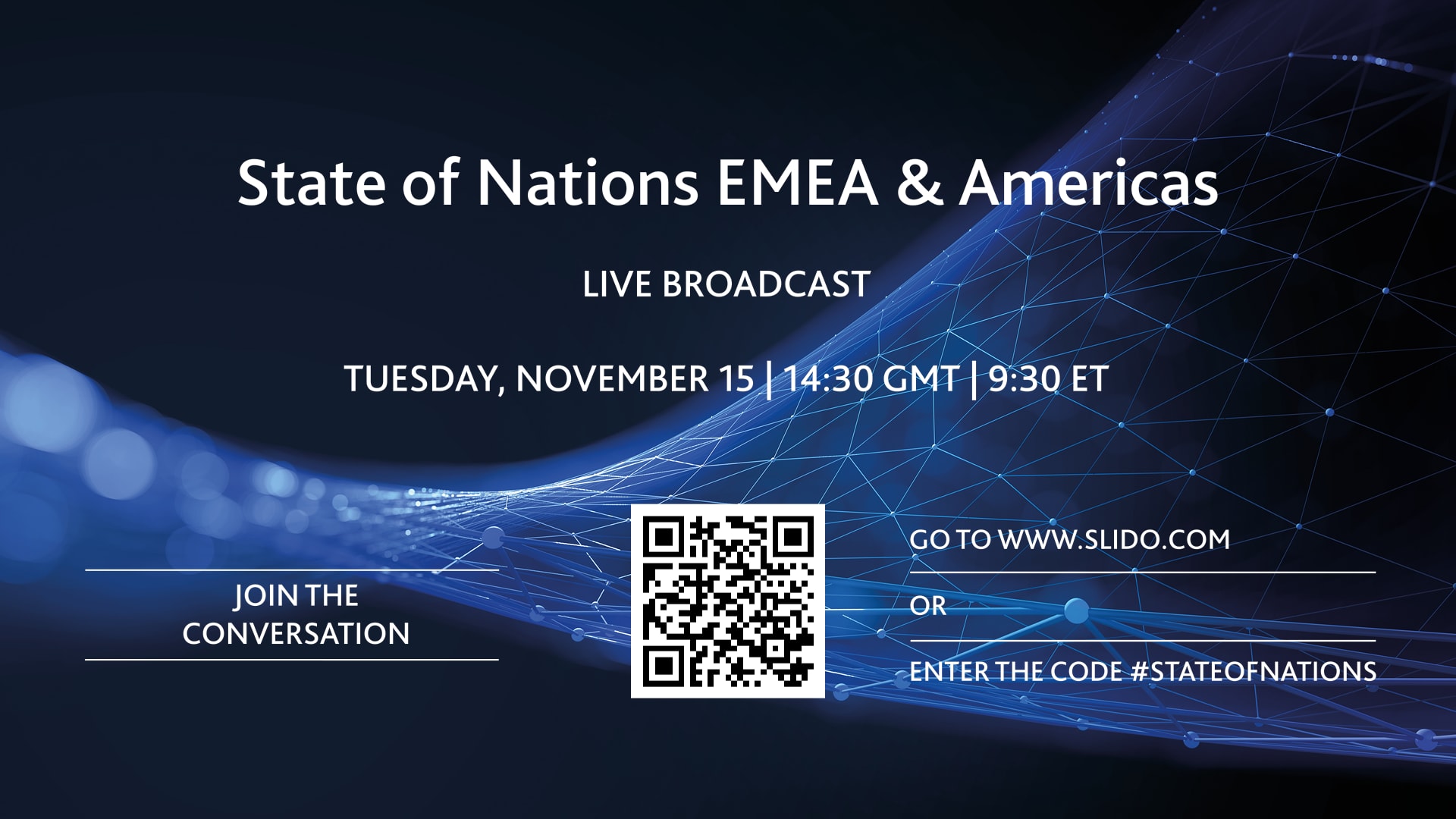 SOVEREIGN DEEP DIVES Join some of Moody’s top minds as they assess the credit profiles of eight key markets.

Anabel González is Deputy Director-General at the World Trade Organization since June 2021. She is a renowned global expert on trade, investment, and economic development. She has previously served as Minister of Trade of Costa Rica, Senior Director of the World Bank Trade and Competitiveness Global Practice and Director of the WTO Agriculture Division. Before her current job, she was Non-Resident Senior Fellow at the Peterson Institute for International Economics, where she hosted the virtual series Trade Winds, and Senior Advisor at BCG.

Martin Wolf’s unique perspective and experience gives him an unparalleled voice on European and global economies. He can speak with authority about the economic relationships underlying our complex financial systems, what we can learn from them, and what lies ahead for Europe, the US, and the rest of the world.

He is Associate Editor and Chief Economics Commentator at the Financial Times, London. In his regular columns for the FT, Mr. Wolf covers a wide range of economically relevant topics. In the recent past, these have included: the state of the global, European and British economies; the “global savings glut” and “secular stagnation”; global monetary policies; the rise of populism; the political economy of Brexit; the future of the eurozone; the future of globalisation; the challenges to the Chinese and Indian economies; the past and future of the global financial system; radical monetary reform; the productivity slowdown and technological change; the economics of migration; the economics of climate change; reform of corporate governance; and the future of universities. For his “services to financial journalism”, Martin was awarded the CBE (Commander of the British Empire) in 2000.

Martin brings considerable practical experience to his writings. He was a member of the UK government’s Independent Commission on Banking between June 2010 and September 2011. Previously, he was a senior economist for ten years at the World Bank’s division of international trade. He has been a Forum Fellow at the World Economic Forum in Davos since 1999, where he has served as a moderator, and is a member of its International Media Council. He was Director of Studies at the Trade Policy Research Centre, London, and has advised governments and international organizations on trade and economic integration.

Martin has won several prestigious awards for his journalism, including the Overseas Press Club of America’s prize for “best commentary on international news in any medium” for 2013; the James Cameron Memorial Award for 2012; a distinguished honorary fellowship by the European International Business Academy in 2012; and the 2012 International Ischia Journalism Prize (Italy’s most prestigious media award).

Other awards include the US Society of Business Writers and Editors 15th Annual Best Business Journalism award, and the “Ludwig-Erhard-Preis für Wirtschaftspublizistik” (“Ludwig Erhard Prize for economic commentary”) from the Ludwig Erhard Stiftung (Foundation) for 2009. He won “Commentariat of the Year 2009” at the Comment Awards, sponsored by Editorial Intelligence, and the Decade of Excellence Award at the 2003 Business Journalists of the Year Awards.

Martin has a well-deserved reputation for rigorous thinking, deep insight, and his incisive and witty delivery.

Alicia García Herrero is the Chief Economist for Asia Pacific at Natixis. She also serves as

Member of the Board of the Center for Asia-Pacific Resilience and Innovation (CAPRI). Alicia

is also Adjunct Professor at the Hong Kong University of Science and Technology. Finally,

among other advisory and teaching positions.

at Banco Bilbao Vizcaya Argentaria (BBVA), Member of the Asian Research Program at the

Bank of Spain, Member of the Counsel to the Executive Board of the European Central

Bank, Head of Emerging Economies at the Research Department at Banco Santander, and

Economist at the International Monetary Fund. As regards her academic career, Alicia has

extensively in refereed journals and books (see her publications in ResearchGate, Google

Bloomberg, CNBC and CNN) as well as social media (LinkedIn and Twitter). As a

recognition, Alicia was included in the TOP Voices in Economy and Finance by LinkedIn in

Elisa is Vice President – Senior Analyst at Moody’s Sovereign Risk Group in New York. She has lead and back-up analyst responsibilities for a number of North- and Sub-Saharan African sovereigns and supranationals. Her previous regional coverage also included sovereigns in Southeast Europe and in the CIS. Prior to joining Moody’s, Elisa spent two years at the Swiss Ministry of Finance in Berne, Switzerland, and seven years as Senior Analyst at Roubini Global Economic in New York covering the Euro area and Finance and Banking issues. Elisa holds an MA in Economics from New York University (NYU) and completed her undergraduate studies with a Lizentiat in Economics from the University of Zurich, Switzerland. Elisa speaks fluent German and Italian and proficient French

Dr. Gaurav Ganguly is the Chief European Economist and Head of the Climate Change Group at Moodys Analytics. Gaurav is an expert on a number of international economies having spent several years analysing and commenting on countries across Europe, Asia and the Americas. Gaurav has previously worked in financial services, consulting and audit. He was a research fellow at the Grantham Institute for Climate Change at Imperial College in London, where he developed a framework for using climate scenarios within financial institutions. He currently teaches Environmental Economics at Imperial College. He did his PhD in Economics from the University of Oxford.

Gene Fang is an Associate Managing Director in the Sovereign and sub-sovereign Ratings Group in Asia. Based in Singapore, he manages the teams responsible for sovereign credit ratings in the Asia Pacific region and credit research on Chinese regional- and local governments.

Before joining Moody’s, Gene worked as an investment banker, covering financial institutions for J.P. Morgan and Citigroup in Hong Kong and Singapore. In this role, he managed client relationships across Asia and advised on debt, equity, and M&A transactions. Gene graduated from Columbia University in political science. He also holds an MBA from Harvard Business School and a Master in Public Policy from Harvard University’s Kennedy School of Government.

Steven G. Cochrane, PhD, is Chief APAC Economist with Moody’s Analytics. He leads the Asia economic analysis and forecasting activities of the Moody’s Analytics research team, as well as the continual expansion of the company’s international, national and subnational forecast models. In addition, Steve directs consulting projects for clients to help them understand the effect of regional economic developments on their business under baseline forecasts and alternative scenarios. Steve’s expertise lies in providing clear insights into an area’s or region’s strengths, weaknesses and comparative advantages, relative to macro or global economic trends.

A highly-regarded speaker, Dr. Cochrane has provided economic insights at hundreds of engagements over the past 20 years and has been featured on CNBC, CNA, Bloomberg TV, Wall Street Radio, and the PBS News Hour. Through his research and presentations, Steve dissects how various components of the macro and regional economies shape patterns of growth. His extensive expertise on U.S. and global economic issues makes also him a popular speaker at client conferences and executive briefings.

Dr. Michael Taylor is a Managing Director for Moody’s Investors Service. He is also Moody’s Chief Credit Officer for the Asia Pacific region.

Michael joined Moody’s after a distinguished career in several leading central banks and international financial institutions, including roles at the Bank of England, the IMF — where as Resident Representative, he was closely involved in the resolution of the Indonesian financial crisis in the late 1990s — and the Hong Kong Monetary Authority as Head of Banking Policy. He was also the Advisor to the Governor of the Central Bank of Bahrain.

Michael has also had a distinguished academic career, including as Reader in Financial Regulation at Reading University. He has published widely on financial stability and financial regulation, and given seminars and lectures at the Said Business School at Oxford University, at Harvard Law School, Columbia University, and The University of Hong Kong.

Michael holds a bachelor’s degree as well as a doctorate from Oxford University. He also holds a master’s in International Business Law from the University of London.

Mauro has been with Moody’s Sovereign Risk Group since 1996. He is currentlyAssociate Managing Director for the Americas responsible for sovereign ratings inLatin America, the Caribbean, US and Canada. Mauro is also responsible for ratings of multilateral banks in the region.

Prior to joining Moody’s, he was Managing Director for Latin America at WhartonEconometrics (WEFA) in Philadelphia. Mauro completed graduate studies at theUniversity of Wisconsin in the areas of International Finance and Econometrics.

He did his undergraduate studies -- major in Economics -- at the Instituto Tecnológico y de Estudios Superiores de Monterrey (I.T.E.S.M.) in Mexico.

Alejandro Olivo heads the Sovereign Risk Group for the Americas and Europe. He is responsible for analytical teams covering more than 323 issuers in those regions. Prior to his current role, Alejandro managed the teams covering project and infrastructure issuers across Latin America and Canada.

Before joining Moody´s, Alejandro held a number of senior positions at both the government and the private sector. In the public sector, Alejandro served as CFO of Financiera Rural, Mexico´s rural development bank, Deputy Director at Banobras and Treasurer of the Government of Mexico City. In the private sector, Alejandro worked for Société Générale as a Senior Relationship Banker covering Latin American clients from New York and, prior to that, as the bank´s Risk Economist for Latin America based in Paris.